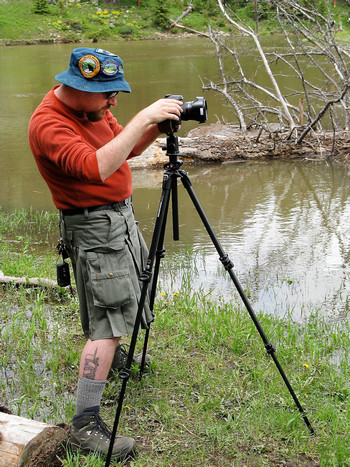 My name is Aaron G. Peabody and I’m an amateur photographer living in Edmonds, Washington (15 miles north of Seattle), on the shores of the Puget Sound in America’s Pacific Northwest. I specialize in wildlife, landscape and nature photography.

For as long as I can remember I’ve been in love with the natural world. Mountains, rivers, oceans and forests—these things have a special hold on me and have exercised and enormous influence in my life. The flash of wings as a hawk dives for prey, the slow play of light on skin as a jaguar moves through the brush, the moment of frozen motion as you encounter a dear on a mountain trail. All throughout my life the most special moments have been when I am away from the habitats of man and into the realms of wolf and bison and raven. It’s through my photographs that I hope to share all of this with you. The art of photography is—for me—the patience for the moment when wind and beast and the turning of the earth are all in alignment and a perfect picture can be made. I hope I can share all of this with you.

I have lived in Washington state, since April '04, and before that in Cleveland, Ohio, since '99. I a cat named Pixel and two dogs named Hudson and Samantha.

All of that being said, let me tell you a little bit more about myself.

I have been interested in photography since family vacations to National Parks when I was a child. Both of my parents are avid amateur photographers and I grew up with their interest in the hobby and skill to nurture my own. In college I was given a 35mm Pentax (fully manual) camera with a couple of lenses and other accessories. This gave my interest in it a boost which carried me through until the digital revolution began in earnest and digital cameras really started becoming a viable option. My first digital camera was a 2.1 megapixel, $800 Epson PhotoPC 850Z. After more than three years and thousands of photos I upgraded to a 6.3 megapixel Canon EOS Digital Rebel. With the procurement of this new equipment I felt like a whole new world had opened up to me and I began to seriously explore photography as an art form and medium of communication. 10,000 + photos later the latest addition to my photographic kit is the Canon EOS 40D.

While attending Syracuse University my major was Design/Technical Theatre, with a focus in lighting design. During that period I also developed a love of computers and the internet. One of my greatest interests in this field was web and graphics design. After graduation in 1999 I parlayed this hobby into a profession, working for over four years with a Cleveland company named Smart Solutions, Inc. In early 2004 my job was outsourced to India, forcing me to enter the world of freelance and contract work. For a time I worked doing freelance projects under the name of Wyrd Weavers Design. I was without permanent employment from September 2004 to October 2005, though I prefer to think of it as being self-employed. I spent most of 2005 working for a variety of companies doing theatrical and production work. In October of that year I went in search of a more stable situation.

For a couple months I had a part time job as a Mac Specialist at the Apple Store in Seattle, while at the same time working nights as a security guard. It wasn’t too long—thankfully—before I was promoted to full time at the Apple Store. Since then I have been a Mac Specialist, the store’s Business Consultant, a Creative and now the Lead Creative. In this role I lead the store’s personal training department, managing a team of approximately twenty people. I’m pleased to say that I love this job and love this company. I’m having a blast and looking forward to being with Apple for a long time to come.

I enjoy hiking, walking, camping and wood working. I am a voracious reader. I love doing drafting and technical drawing in Adobe Illustrator. I still like web and graphic design, though now I do it only for myself and for the occasional thing at work. Sometimes I just like to sit on my front porch and read. I enjoy discussing history, politics and religion.
Copyright © 2020 Aaron G. Peabody and Aaron G. Peabody Photography. All rights reserved.
Powered by ZENFOLIO User Agreement
Cancel
Continue